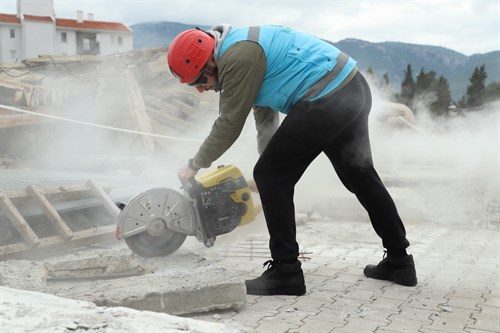 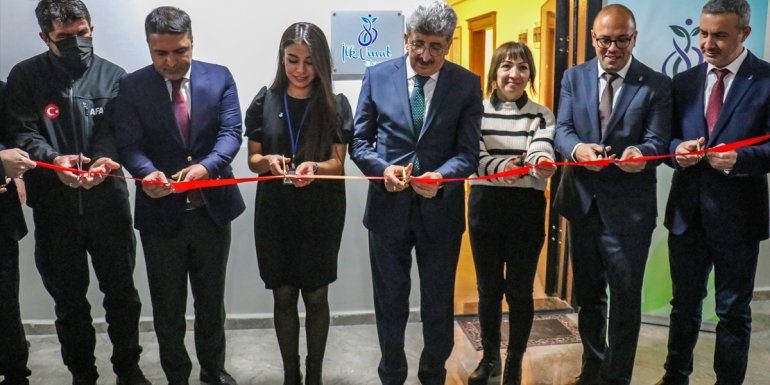 Governor and Deputy Mayor of Metropolitan Municipality Mehmet Emin Bilmez, Secretary General of Metropolitan Municipality Mehmet Fatih Çelikel, Provincial Director of AFAD Ali İhsan Körpeş, Chairman of First Hope Association Demokan Kileci and guests attended the opening of the association in İskele Mahallesi. In his speech, Bilmez wished the association to be beneficial to the city. Stating that Van is located both on the transit route and in a risky region in terms of disasters, Bilmez said, “Our association will be able to work together with our public institutions and organizations here. I hope they do not have too much work. Victims and immigrants had the opportunity to tell their problems more easily. thank you.” Kaynak: AA 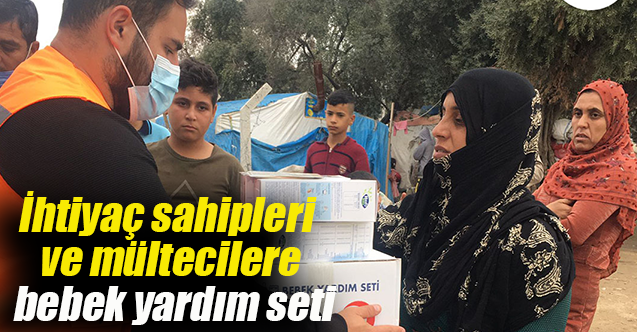 The association, which distributed baby aid kits to the needy and refugees living in Torbalı yesterday, announced that they will continue to reach those in need in the district and throughout İzmir. The volunteers of the association said, “Because we see a deep meaning in the saying, “Treat them the way you want people to treat you, and this can happen to anyone, we want to leave an example of helping people and solidarity.” made a statement. 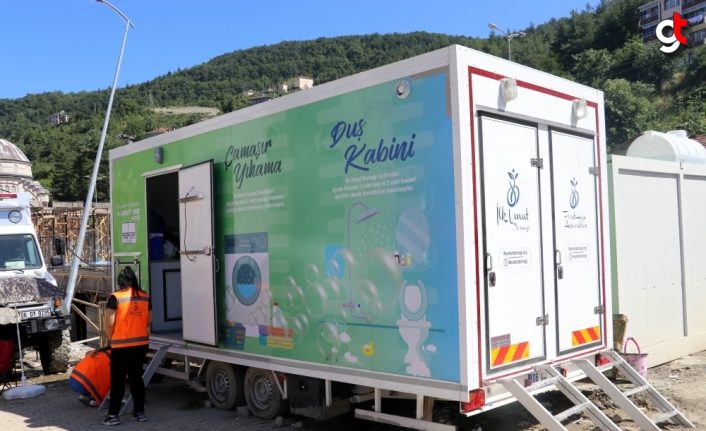 -“We get very positive reactions”

First Hope Association Coordinator Serhan Yeşil told Anadolu Agency (AA) that Turkey is in a disaster area, and they have experienced it by living.

Explaining that they established a search and rescue team within the association, Yeşil continued as follows:

“When we conduct research on earthquakes, food and drink can be supplied to the region, usually through the Red Crescent and other large NGOs. We saw that disaster survivors needed toilets, showers and clean laundry as infrastructure problems occurred in disasters. We started this application with the Denizli-Acıpayam earthquake. We first started with 1 vehicle and now we have 4 mobile hygiene vehicles serving within our association. We used these vehicles in the Elazig earthquake, the Dereli flood zone and the Izmir earthquake. We get very positive reactions from our citizens.” 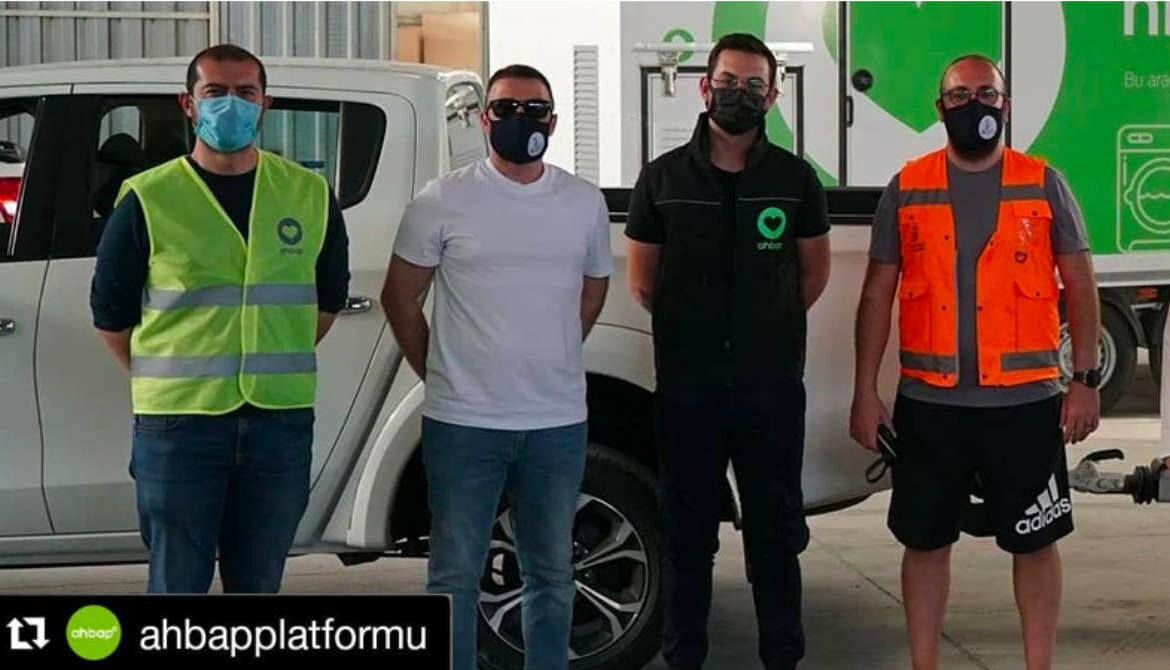 We would like to thank @ilkumutdernegi for sharing their experiences in the preparation of our hygiene tools and for their support. 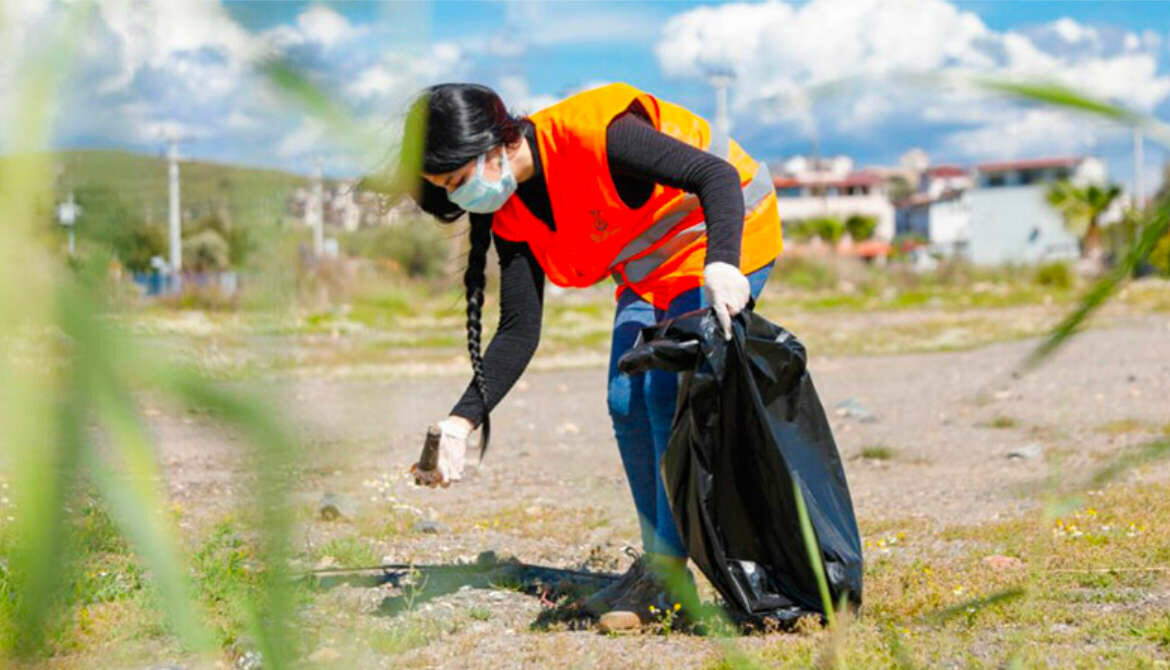 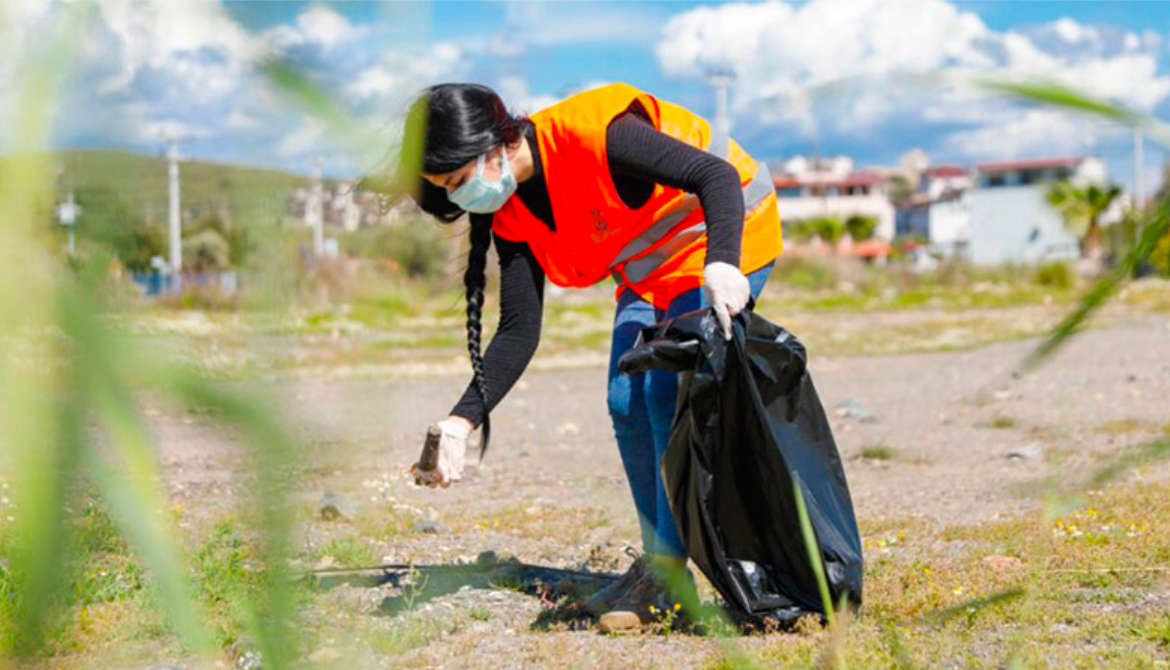 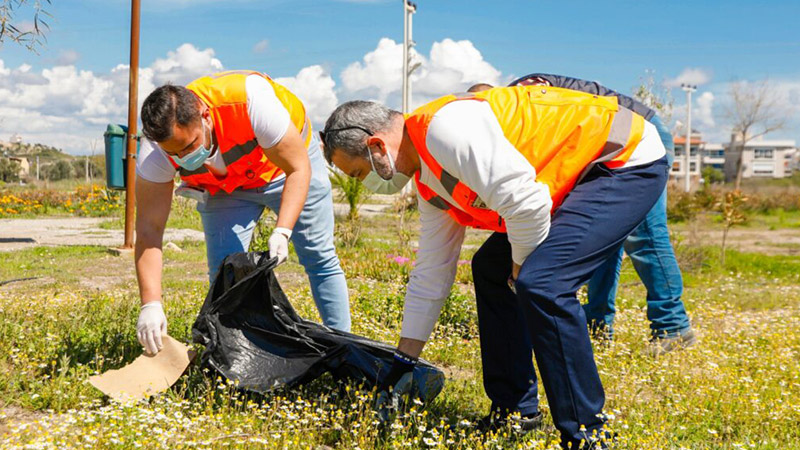 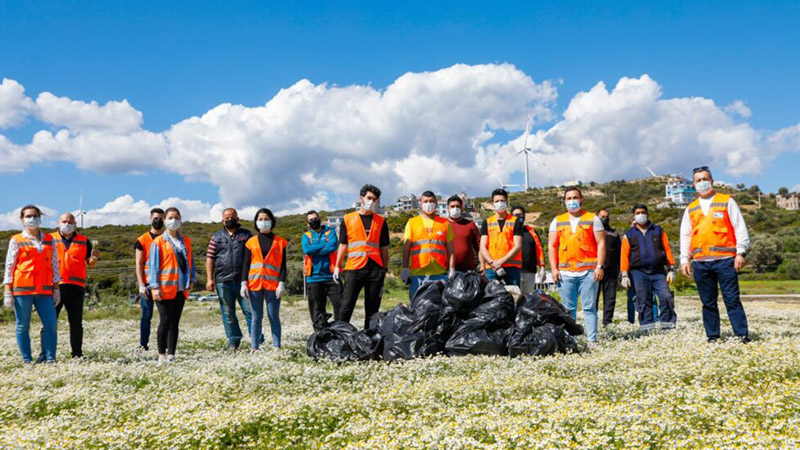 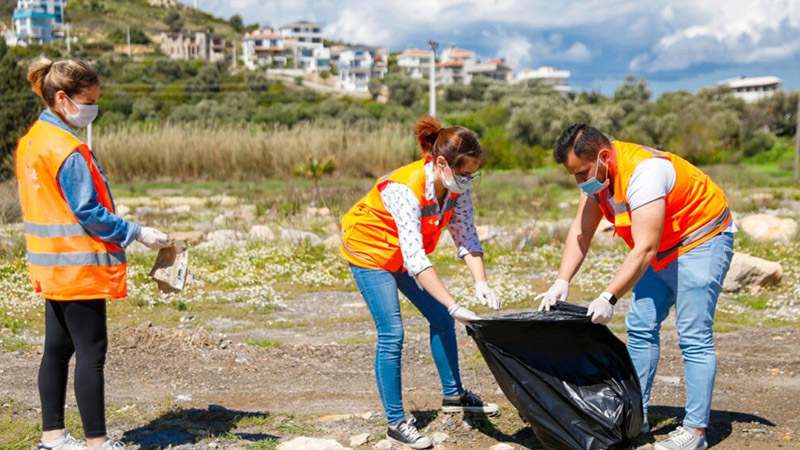 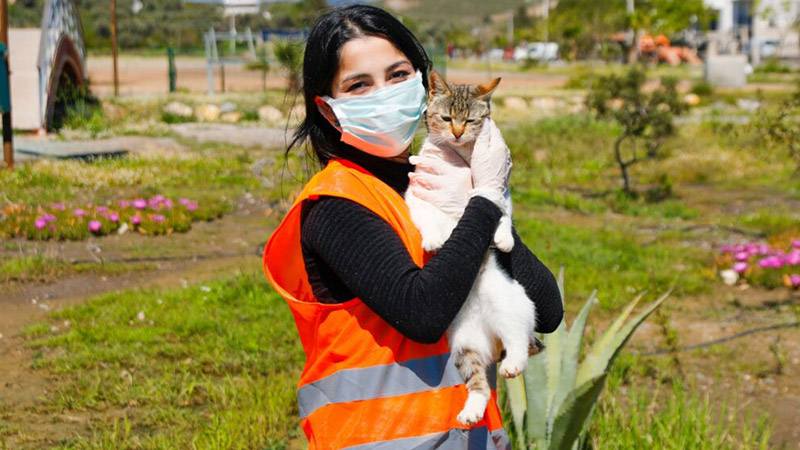 Seferihisar Municipality and İzmir Branch of the First Hope Association organized an environmental cleaning activity in the Sığacık neighborhood.

Voluntary participant and staff of Seferihisar Municipality Cleaning Affairs Directorate in the organization prepared within the scope of the activity of the İzmir Branch of the First Hope Association to leave a clean environment to the future, cleaned the area in Sığacık Girlen location.

Refik Topçu, Head of İzmir Branch of the First Hope Association, thanked Seferihisar Municipality for his support, saying, “According to the report of the World Health Organization, millions of people get cancer every year due to unhealthy environmental conditions, while 12.6 million people die due to diseases related to environmental pollution. The main reasons for the increase in environmental pollution are the unconscious use of rapidly developing technology, industry and natural resources. While nature has a beauty that renews and cleans itself, environmental pollution has become inevitable due to population growth.

It is not possible for us to completely stop these factors that cause environmental pollution, but we have decided to do our part and take action to minimize their impact on the environment. As the İzmir Representation of First Hope Association team and volunteers, we carried out environmental cleaning in Sığacık neighborhood of Seferihisar within the scope of social responsibility project. It is our duty to protect nature, and we take care that our employees are conscious individuals on this issue. As the First Hope Association, we will continue to put our signature on social responsibility projects wherever we are, in the upcoming periods. He said, “We would like to thank Seferihisar Municipality, Cleaning Works Manager Kadir Akay and all his staff for their cooperation”. 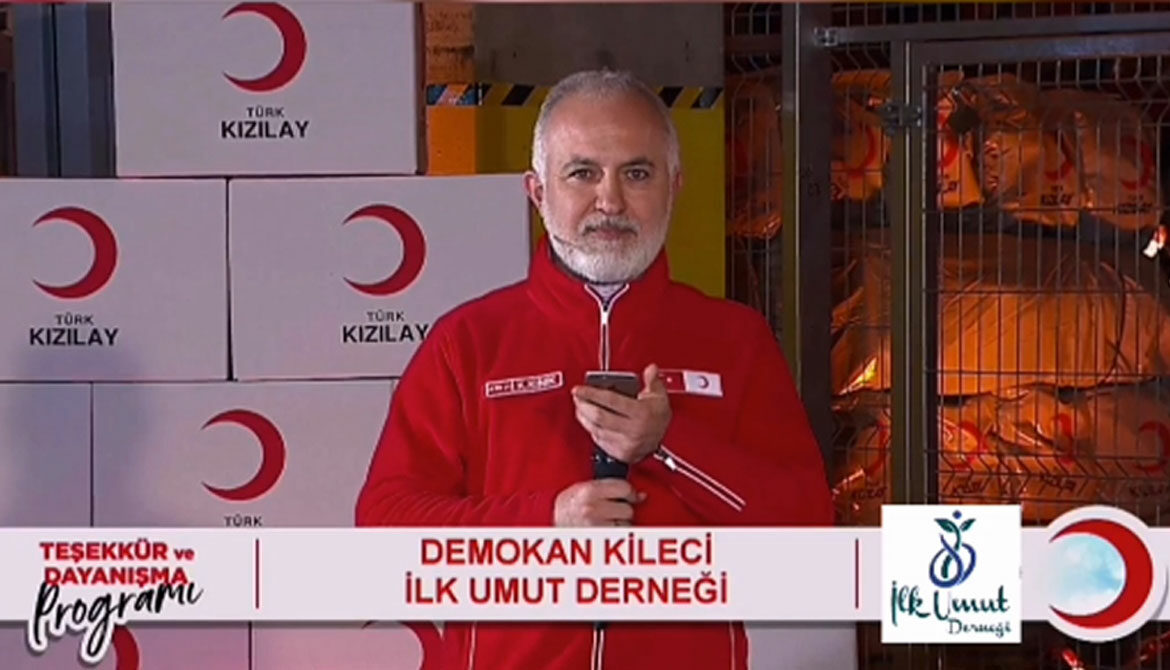 In the Thanks and Solidarity Program organized by the Turkish Red Crescent, as the First Hope Association, we did not leave the Red Crescent alone, with whom we are happy to work shoulder to shoulder. Chairman of the Board of Directors, Mr. Demokan Kileci, promised to donate 3000 pieces of hygiene sets to the Turkish Red Crescent in order to reach people in need within the scope of combating Covid-19. 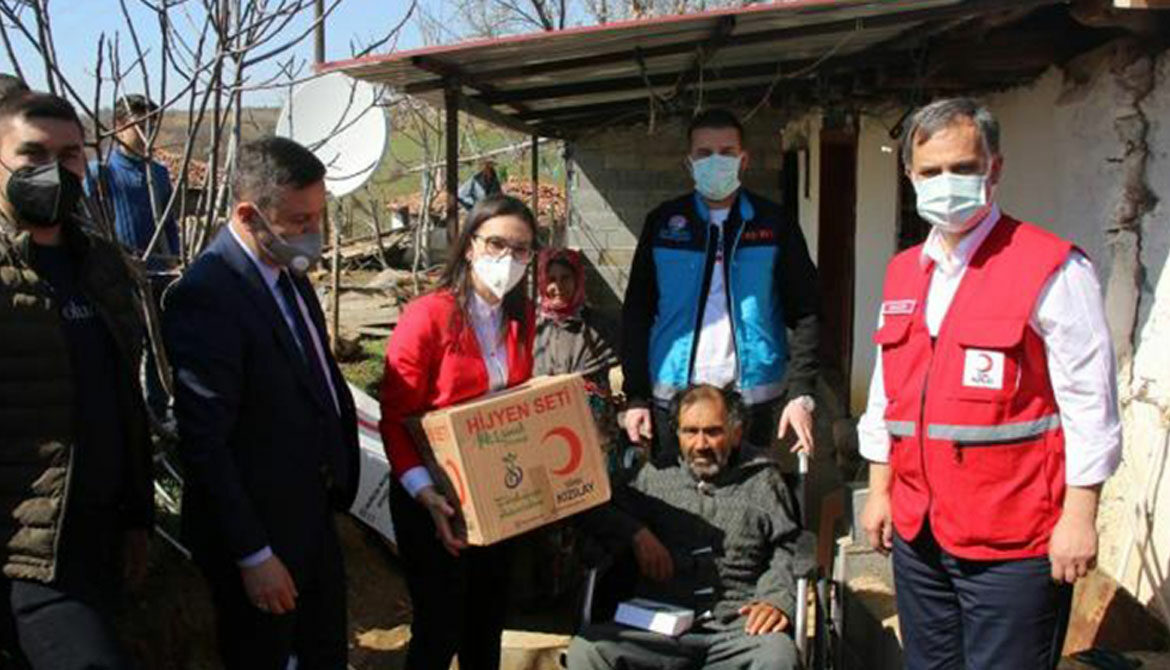 Turkish Red Crescent, in cooperation with the Ministry of Labor and Social Policies of North Macedonia and the Red Cross of North Macedonia, donated wheelchairs, hearing aids and hygiene packages to the people in need in the country.

Within the scope of the support, 100 wheelchairs, 50 for adults and 50 for pediatric patients, 25 hearing aids and 500 hygiene packages were delivered.

Speaking to reporters at the handover ceremony held in Radovish city in the southeast of North Macedonia, Turkish Red Crescent General Manager İbrahim Altan said that the victims and disabled citizens were previously identified by the Ministry of Labor and Social Policies.

Stating that they have been working with their partners in the North Macedonia Red Cross since 1995, Altan said, “We have added a new one to them. From now on, we will have joint work with them to help people in need, victims and people. said.

“Help comes from them whenever we need it”

Enver Hüseyin, the Deputy Minister of Labor and Social Policies, stated that the Turkish Red Crescent and the North Macedonian Red Cross are two sister institutions in close cooperation and stated that they support the obligations of these institutions as the ministry.

After the ceremony and the official visit in the municipality, Altan and Hüseyin and the accompanying delegation visited Ali Koç village of Radoviş and delivered wheelchairs and hearing aids to those in need. 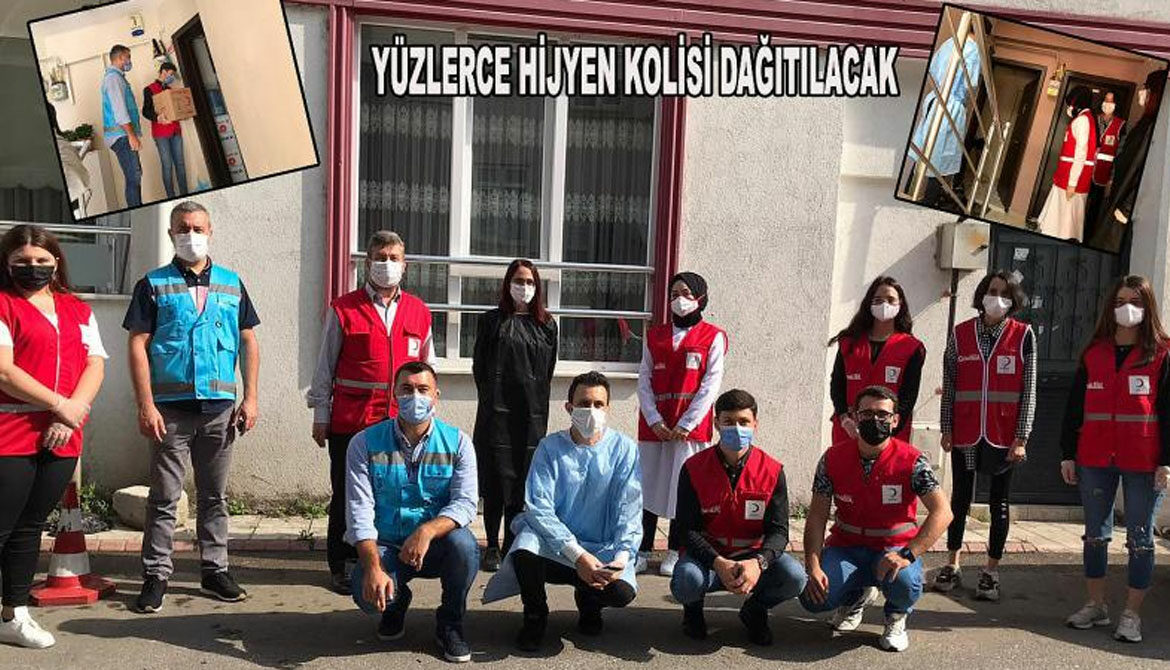 Joint Project From The First Hope Association With Kızılay

Within the scope of Covid-19 aid efforts, the project, which is carried out jointly by the Red Crescent and the First Hope Association, continues to distribute hygiene kits to families in Düzce.

Family Hygiene Packages donated to the Red Crescent by the First Hope Association started to be distributed in Düzce together with the filming team. parcels were delivered.

Hundreds of hygiene boxes containing shampoo, cologne, hand soap, bleach, dishwashing detergent, soft soap, dish sponge, toilet paper, paper towels, toothpaste, toothbrush, razor blades, and shaving foam are the ones that suffer the greatest difficulty in reaching this type of material. It will be distributed in consideration of the citizens. 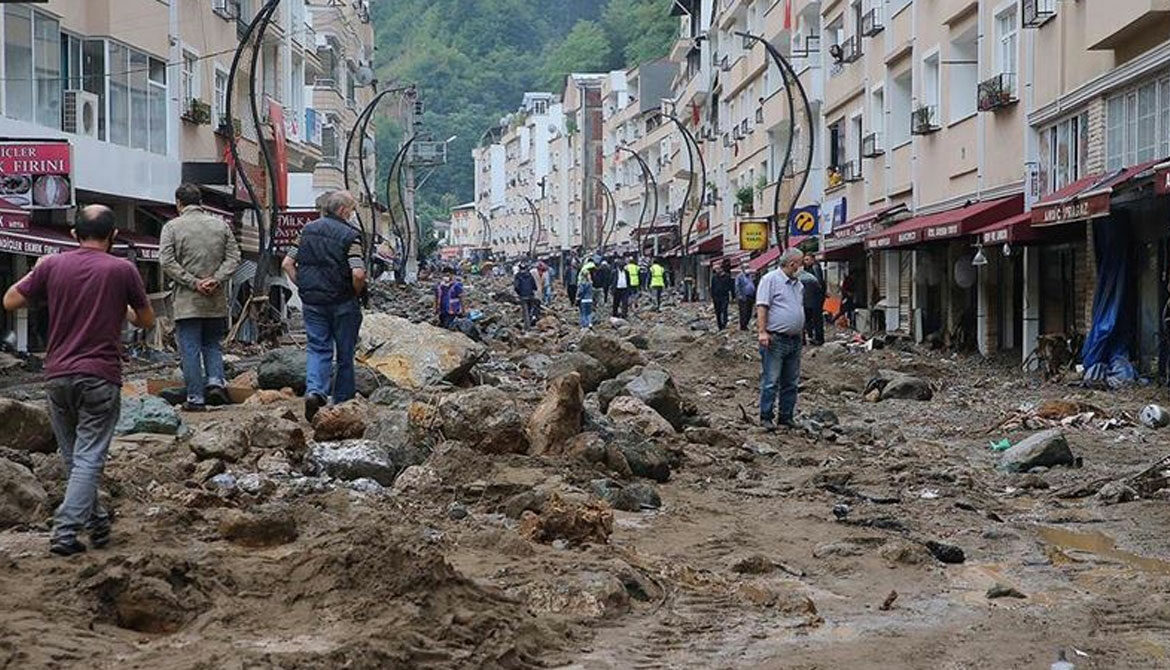 Ankara The Ministry of Internal Affairs Disaster and Emergency Management Presidency (AFAD) reported that 9 million lira of emergency aid was sent to the region where improvement works continue after the flood in Giresun. According to the statement made by AFAD, after the floods, floods and landslides in Giresun, both the search for the missing 7 citizens and the improvement works continue. Following the flood, 172 people were rescued alive. In the works, in which 2784 personnel from 34 institutions and organizations participated, roads connected to the Highways and 94 village roads were opened, electricity was given to 65 villages. AFAD sent 9 million lira emergency aid to the region where 21 telephone switchboards were put back into service. Floods, floods and landslides occurred in the central, Dereli, Espiye, Doğankent, Tirebolu, Güce, Görele and Yağdere districts due to the heavy rainfall that started in Giresun on August 22. In the incidents where 5 people lost their lives and 3 gendarmerie personnel were martyred, efforts are continuing in the region to reach the disappeared and to return life to normal by working the phases of disaster management under the coordination of AFAD. The nutritional, shelter and psychosocial support needs of the citizens affected by the events are also met. The disappearances continue to be sought 172 people who were trapped as a result of the work of the teams were rescued. The search continues in Espiye Kaşdibi location for one of the 7 missing persons, at the 12th kilometer of Doğankent-Tirebolu road for three, in Dereli for one and in Çaldağ for two. In addition to AFAD teams, Gendarmerie, Coast Guard and NGO teams are making significant efforts to recover the disappeared. The Gendarmerie is participating in the activities with a total of 675 people from units such as JÖH, JÖAH, JAK, JİKU, UGT, SAT, 1 helicopter and 2 cadaver dogs. The Coast Guard Command contributes to the work with a total of 35 personnel from 2 ships and 2 diving teams. Electricity was cut off in 70 villages and 8 neighborhoods after heavy rains. As a result of the work of the teams, electricity was started to be supplied to 65 of the villages and 8 neighborhoods, and the works for the remaining 5 villages continue. Electricity was given to a part of Dereli district center. Citizens were informed that the transformer power was limited. 94 of the 118 village roads that were closed in the region were opened to transportation as a result of the works carried out. Work continues to open the remaining 24 village roads. Transportation is provided on 5 of the 6 routes connected to the Highways, which are completely closed to transportation. Although the currently closed Yağdere-Alucra road has been opened up to the 34th kilometer, work continues. In the studies carried out on the interruption of communication in 22 telecommunication stations throughout the province, 21 plants were put into service again. There are no victims who receive inpatient treatment under surveillance after the rains. 2 field health tents were put into operation by the Ministry of Health UMKE in Dereli and Doğankent. With the efforts of the Turkish Red Crescent, 7,500 meals / container of hot food and 20,000 packaged water are distributed daily. Within the scope of psychosocial support services, 13 teams work in the field with 32 personnel. In Dereli, Çaldağ, Tirebolu and Merkez villages, all victims were visited, 141 support meetings were held with 41 families. 2 mobile social service vehicles were also deployed in Tirebolu and Dereli districts. 38 million Turkish Liras of damage detected in Dereli Damage assessment studies continue with 25 teams. In total, 1754 independent sections in 392 buildings were examined. 141 independent sections in 45 buildings were determined to be severely damaged, destroyed or to be demolished in an emergency. 57 personnel assigned with 21 vehicles related to agriculture and livestock damages detected 517 damages in 190 villages and neighborhoods in 11 districts. A total of 38 million TL loss was determined with 231 loss assessments in Dereli. It was understood that the value of 125 vehicles was 7 million 700 thousand TL. It was understood that a loss of 9 million 200 thousand TL was incurred by determining 173 losses in Doğankent. The total value of 28 vehicles affected by the flood was determined to be 1 million 620 thousand TL. Intervention and improvement is done by 34 institutions and organizations Intervention and improvement activities under the coordination of AFAD, Ministry of Environment and Urbanization, Gendarmerie, Police, Ministry of Health UMKE, 112, General Directorate of Highways, State Hydraulic Works (DSI), Coast Guard Command, Ministry of Agriculture and Forestry and Turkish Red Crescent units, as well as Giresun Municipality and Fire Department, Samsun Metropolitan Municipality, Trabzon Metropolitan Municipality, Ordu Metropolitan Municipality, Giresun, Sivas Akıncılar and Gölova Special Administrations, Çoruh EDAŞ, Giresun TİKAFE, Samsun Water and Sewerage Administration (SASKİ), Türk Telekom, AHBAP, AKUT, ANDA Bursa, Beşir Association, Cansuyu Association, Deniz Feneri Association, IHH, İlkumut Association, MAGARA AKT, NEF Social Aid Foundation, TAMGA AKT, TIDER, TİKAFE Giresun and volunteers. The developments are followed by AFAD 24 hours a day, 7 days a week.